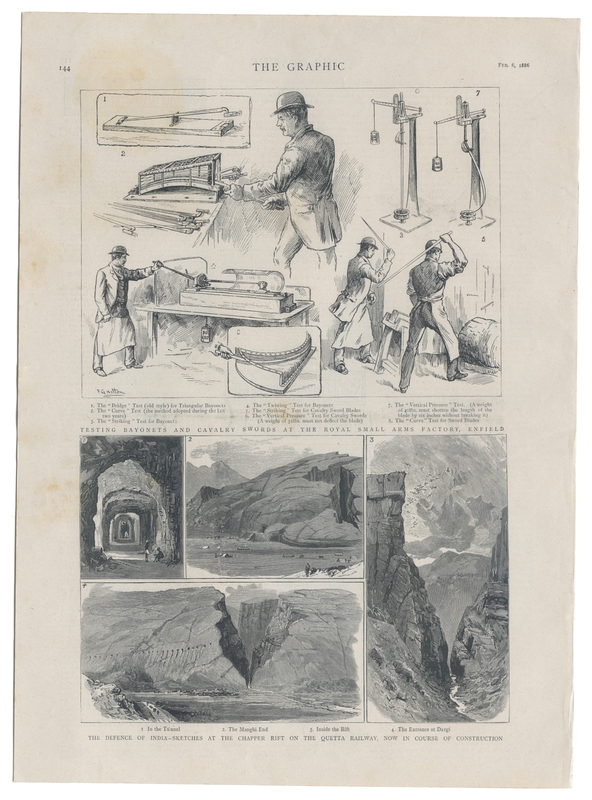 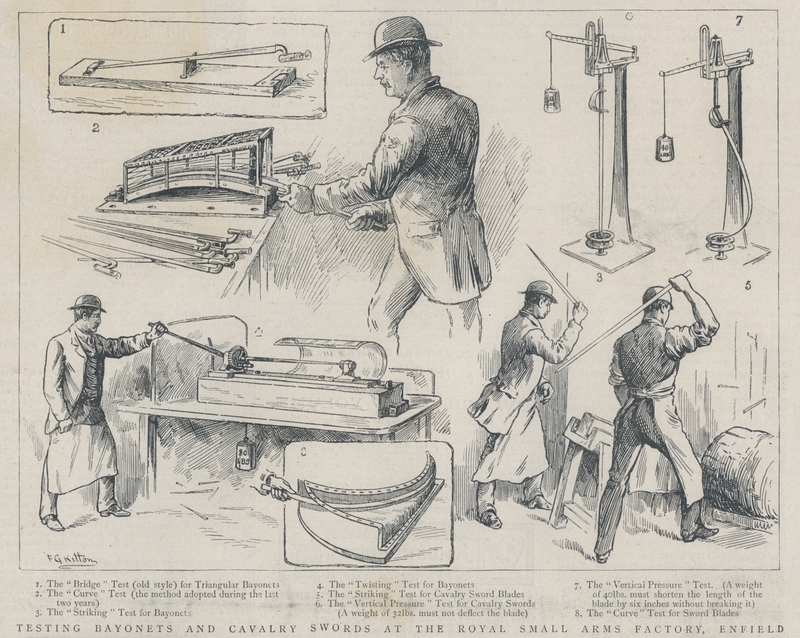 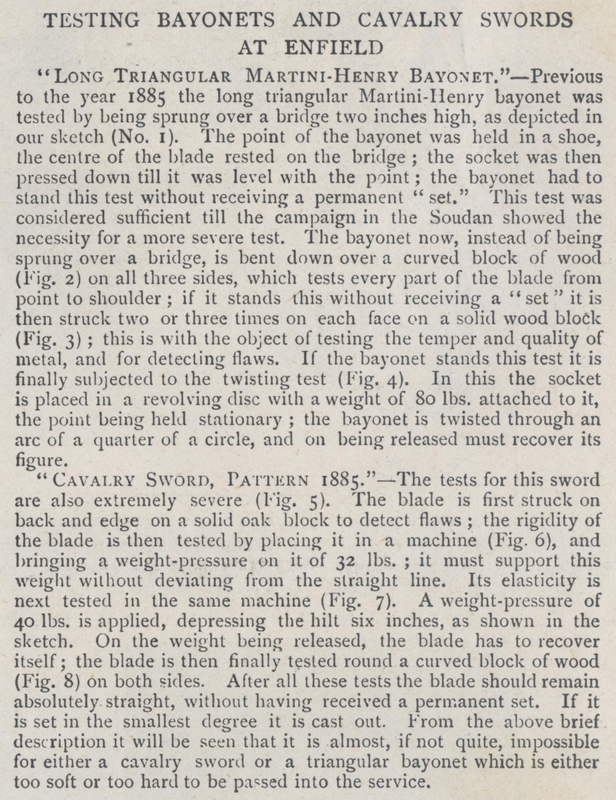 Illustration and short article describing the new methods for testing the triangular Martini-Henry bayonet and the British pattern 1885 calvary sword.

The United Kingdom of Great Britain and Northern Ireland ; Enfield

TESTING BAYONETS AND CAVALRY SWORDS AT ENFIELD
"LONG TRIANGULAR MARTINI-HENRY BAYONET."—Previous to the year 1885 the long triangular Martini-henry bayonet was tested by being sprung over a bridge two inches high, as depicted in our sketch (No. I ). The point of the bayonet was held in a shoe, the centre of the blade rested on the bridge ; the socket was then pressed down till it was level with the pint ; the bayonet had to stand this test without receiving a permanent " set." This test was considered sufficient till the campaign in the Soudan showed the necessity for a more severe test. The bayonet now, instead of being sprung over a bridge, is bent down over a curved block of wood (Fig. 2) on all three sides, which tests every part of the blade from point to shoulder ; if it stands this without receiving a " set " it is then struck two or three times on each face on a solid wood block (Fig. 3) ; this is with the object of testing the temper and quality of metal, and for detecting flaws. If the bayonet stands this test it is finally subjected to the twisting test (Fig. 4). In this the socket is placed in a revolving disc with a weight of 8o lbs. attached to it, the point being held stationary ; the bayonet is twisted through an arc of a quarter of a click, and on being released must recover its figure. "

CAVALRY SWORD, PATTERN 1885."—The tests for this sword are also extremely severe (Fig. 5). The blade is first struck on back and edge on a solid oak block to detect flaws ; the rigidity of the blade is then tested by placing it in a machine (Fig. 6), and bringing a weight-pressure on it of 32 lbs. ; it must support this weight without deviating from the straight line. Its elasticity is next tested in the same machine (Fig. 7). A weight-pressure of 40 lbs. is applied, depressing the hilt six inches, as shown in the sketch. On the weight being released, the blade has to recover itself ; the blade is then finally tested round a curved block of wood (Fig. 8) on both sides. After all these tests the blade should remain absolutely straight, without having received a permanent set. If it is set in the smallest degree it is cast out. From the above brief description it will be seen that it is almost, if not quite, impossible for either a cavalry sword or a triangular bayonet which is either too soft or too hard to be passed into the service.

Loaned for digitization by Benjamin Bowles