Photo from the 1908 Olympic Games 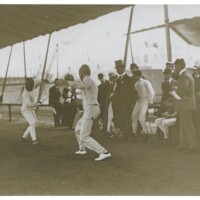 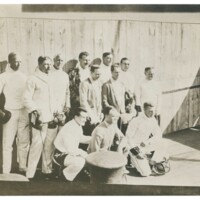 A group of 12 fencers, 3 kneeling and 9 standing, posing in front of a camera (not pictured).

"From the N.Y. Herald Syndicate" and "Olympic Fencing Team" stamped on back. 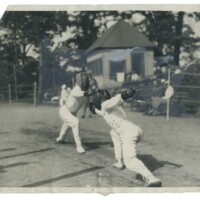 Arthur St. Clair Lyon and R. Clapp fencing at Travers Island to determine who will represent the United Sates at the 1920 Olympics in Antwerp, Belguim.

Tape: NAVAL ENSIGNS BEING - OUT FOR OLY[MPIC] GAMES AT TRAVIS… 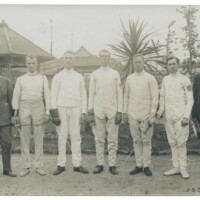 A group of 7 men posing for a photograph, the middle 5 (the American team) in fencing gear, during the 1920 Olympics in Antwerp. 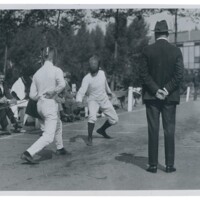 Two men fencing during the Italy vs USA (possibly Claiborne Jay Walker) match at the 1920 Olympics in Antwerp, Belgium.

International News Photo stamp on back 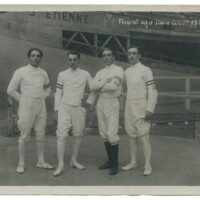 4 men representing Italy in the 1924 Olympics in Fencing. 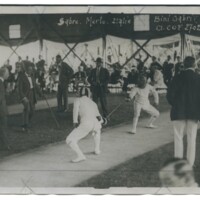 The caption contains an error. Carmelo Merlo represented Argentia at the 1924 Olympics… 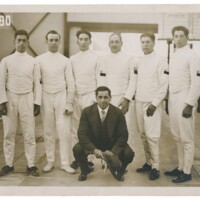 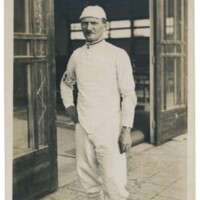 Stamps on back of photo address payment for media reprinting or reuse of photograph in different countries/regions. 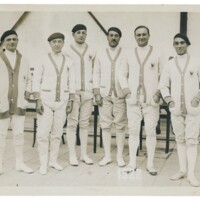 The French Fencing Team at the 1928 Olympics. Their cardigans feature the French Gallic Rooster. It's possible this is a photo of the epee team, who won silver at these games. Possible identifications from left to right are: Émile Cornic, Armand… 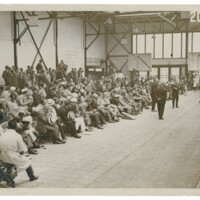 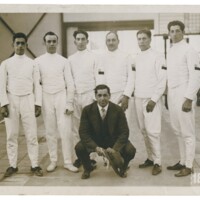 A second printing of the photograph of the Chilean Fencing Team at the 1928 Olympics. Suspected identities include Jorge Garretón Prieto (second from left), Óscar Novoa Fuentes (forth from left) Tomás León Goyoaga Palacios (fifth from right),… 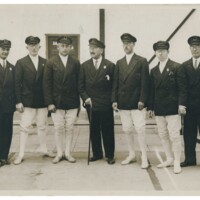 The fencers in this photo (identified by their knickers) are members of the 1928 German Sabre Team. From left to right, Heinrich Moos, Erwin Casmir, Hans Thomson and Hans Halberstadt. Though not on the sabre team, Wilhelm Löffler might be the…

Press caption on back: 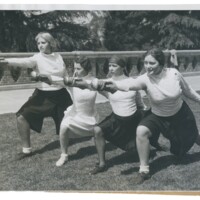 The 4 women pictured (Betty Orb, Nanette Rittler, Edith Jane, and Johana Orb) pose for a photograph. They qualified for the 1932 Olympic Tryouts.

THEY WILL COMPETE IN OLYMPIC TRYOUTS. 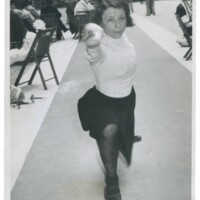 A photograph of Mary Addams of Belgium lunging at the camera. 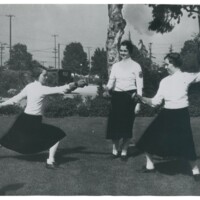 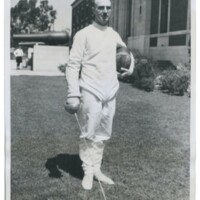 Portrait of H.G. Feraud, the US representative in (1932) Olympic Fencing and Fencing Commissioner of the Los Angeles A.C.

Caption:
During the Tenth Olympiad 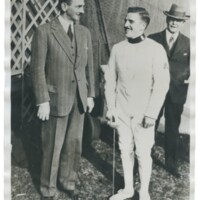 Arranging for Fencing matches of 1932…

Pentathlon Fencers Duranthon and Simonetti at the 1932 Olympics 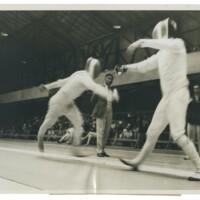 Ivan Duranthon of France and Carlo Simonetti of Italy fence in front of an audience during the pentathlon event of the 1932 Olympics in Los Angeles. They tied in their match.
View all 190 items